Rosa Parks was a quiet woman who changed America by sitting down. Born Feb. 4, 1913, in Tuskegee, Ala., Rosa Parks' refusal to give a white man her seat on an Alabama bus in December 1955 led to her being known as the Mother of Civil Rights. Her non-violent protest mobilized the black community to boycott the Montgomery bus system, which helped end racial segregation in America. The boycott lasted 381 days and legal challenges led to the Supreme Court decision to desegregate the Montgomery bus system and put an end to "Jim Crow" laws segregating blacks and whites from using the same facilities throughout the South. 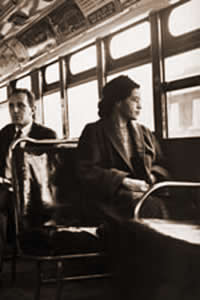 During her lifetime she received the Presidential Medal of Honor and was awarded the Russian Gold Medal. Rosa Parks wanted to be remembered as someone who wanted to be free.

Many said of her that she was soft-spoken, humble and possessed saint-like qualities. She was inspiring and courageous. Condolezza Rice told a press conference in Ottawa, "[Rosa Parks] inspired a whole generation of people to fight for freedom. And Mrs. Parks, who was 92 years old, lived a life that was long and inspirational well beyond that single act — I think for all of us, her inspiration will live on."