Break the Barrier
by Kim Flynn 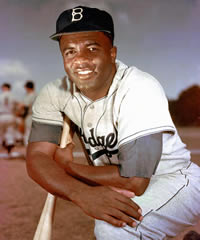 It can be good to have boundaries in life and to protect yourself from harm, but sometimes boundaries need to be broken. Jackie Robinson found it necessary to break through a barrier. As a result, he changed the face of sports in America.

Jackie Robinson was born in 1919 and later became a devout Christian. He was drafted to play for the Brooklyn Dodgers in 1947. At that time, sports were segregated. Robinson became a threat, though not only at bat and stealing bases. His presence made breaking the racial divide and desegregating professional sports a real possibility to those in his time. During his career, he was determined to show the equal ability of blacks among whites and was ridiculed while doing so, yet Robinson's very presence on the baseball field proved this truth.

In his first season as a Dodger, Robinson made an error. He was taunted with racial slurs and insults, which grew louder with every passing moment. As he stood alone on the field in the face of disdain, a friend came alongside him. Fellow Dodger Pee Wee Reese walked up, put an arm around Robinson and stood with him.

How often we need a friend to come and stand by us! We do not walk in this world alone; others walk with us. And when we choose to stand close to someone, we make an impact. Sometimes things just go together, such as America, baseball and apple pie. Friendship is tied just as closely. When we accomplish something, it reflects on our family and friends and forms a foundation and heritage on which others can stand so they can accomplish great things.

Jackie Robinson went on to continue a successful sports career and was inducted into the baseball hall of fame in 1962. He was a member of six World Series teams and six consecutive all-star nominations. He also won The Sporting News Rookie of the Year Award along with the first MLB Rookie of the Year Award, and he was awarded the MVP National League Award.

Robinson, who was most known for his baseball pursuits, also protested against racial inequalities in his military career. He was court-martialed for insubordination because he would not move to the back of a segregated military bus. As a result of the proceeding, his name was cleared and he was given an honorable discharge.

Some of the most powerful words we have from Robinson are from when he is quoted with saying, "I'm not concerned with your liking or disliking me…all I ask is that you respect me as a human being."

Throughout his life, Jackie Robinson was not a stranger to breaking barriers. His victories in sports as a youth, his commitment to his country as a serviceman, his success as vice president of Chock Full o’Nuts corporation, and his leadership as spokesperson for political and civil rights reiterate the fact that sometimes crossing boundaries gives each of us the opportunity and the freedom to succeed.