Daring to Dream Along with Martin Luther King
by H. B. London 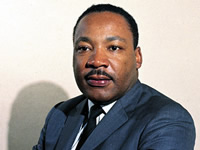 I think back several decades to my boyhood days in Little Rock, Arkansas. I was a white boy in a racist society, but sheltered from all of that because I lived in an all-white world. As a youth, I'm not sure I ever really knew of a black/white segregation. Both races just kind of stayed to themselves. I played against, but never with, African Americans. Now I work side-by-side every day with African-American colleagues who are also close friends.

Last Friday, I asked them if they thought Dr. Martin Luther King Jr. was the greatest African American to come along in their lifetime. They both said yes. Why? Because Martin Luther King dared to face injustice peacefully, and he gave his life for a cause that lives on to this day: racial equality.

As I travel, I run across schools and highways named after Dr. King, but I'm not convinced that my "pastor" colleagues, Alex and Ralph, would feel comfortable in all churches — just as I might not. Why? Racism still exists.

I remember Dr. King's speeches — "I Have a Dream" and "I've Been to the Mountaintop," which was preached the night before he died. I marveled at his oratory and celebrated his courage.

True integration is not an event or an occurrence. It does not happen when you hug a brother of another race at a Promise Keepers event or pray together at a civil rights celebration. To be integrated is to be sensitive to the needs of others, and a seeker of greater understanding for a brother's situation.

We have very few African-American clergy at our pastoral ministries events; therefore, we have been intentional in going to them. We have a small percentage of African Americans who work at Focus on the Family — even though we have attempted to recruit those of every race. Bottom line: we have a long way to go — all races do.

I pray that we all might dream along with Dr. King and that some day, arm in arm, we might all stand on the mountaintop with our Lord Jesus knowing that we have fought the "good fight" for racial unity and have received His well-done.

We just can't wait for the next colleague to do something. We must take the initiative. Who will be the next Dr. Martin Luther King Jr.? And is it necessary that they also be African American? Equality is every race's opportunity.