Give Hope
by Alex Person 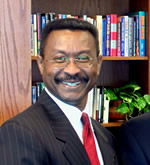 Seven hundred years before the birth of Christ, the prophet Isaiah in the Southern kingdom of Judah heard the announcement that King Uzziah was dead. The king was the 11th in succession and the most popular since David. He was a godly man and the end of an era was a reality. The king reigned for 52 years and made a tremendous impact in Isaiah's life.

In his sorrows the prophet visited the temple hoping to alleviate some of the pain associated with death and grief. Perhaps he simply desired to spend sometime alone with God. In the temple the prophet was transformed and cleansed from his unrighteousness. He was ready to proclaim the love of God for His people.

As a soldier in the army of God he was willing to go and serve where the King of Kings sent him. The power of God had permeated his heart and soul and prepared him to serve until he like Uzziah would complete this most important assignment.

Isaiah accepted his commission and responsibility to share a message which will not be received by the masses. The message will fall on deaf ears; and the hearts of the citizens will grow dull. Eyes will not want to see the inevitable sign of repentance; their hearts will be closed to understanding. The prophet cries out in desperation as the Psalmist did before him, "Lord, how long?" The Lord answers with a vivid picture of chaos and destruction. "Until the cities are laid waste and without inhabitant and the houses or without a man..."

Through it all the prophet hears a divine voice of hope in the midst of despair and desolation. The judgment of the people is balanced by the Holy One of Israel in the form of a tree stump. A remnant by the grace of God will come forth from the stump and reestablish a better relationship with the God of Israel.

Rev. Alex Person managed the African-American pastoral outreach at Focus on the Family at the time this article was written. He previously served as an Air Force chaplain for 17 years, as well as a pastor. He and his wife, Tommie, live in Colorado Springs. They are the proud parents of two adult children and the grandparents of two young grandchildren.