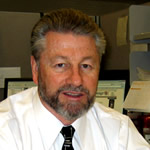 One of the most intriguing books I have ever read (although it seems it took me forever to finish it) was The Body by Charles Colson. The section of the book that took the longest to wade through, but was utterly captivating in its content, dealt with the fall of communism in eastern Europe and the role Christianity played in the revolution that rocked our planet.

One of the principle characters in that era of world history was Peter Dugulescu of Timisoara, Romania. I remember reading of his courage in the face of unbeatable odds, of his faith when everything seemed so dark. I remember thinking his story was too fantastic to be true, especially in this century. He was a real hero.

A few months ago, Peter Dugulescu was the guest speaker at my church. The Peter Dugulescu. Real flesh and blood. As I took my seat, I thought to myself, "This should be good." Little did I know.

Peter Dugulescu is now the pastor of the First Baptist Church of Timisoara and has also been elected to the Parliament of Romania. He conducts regular prayer meetings for the members of his Parliament and even testified before our own U.S. Congressional Human Rights Committee in 1993. When he spoke to us, he was on his way to participate in the National Prayer Breakfast in Washington, D.C.

Pastor Dugulescu, in essence, shared his personal testimony with us. It was the story of one whose political climate and childhood peers led him to view faith in God as unpopular and useless. But once the hand of the Lord touched him, his life was never the same. When confronted with demands to either deny his faith or lose his life, he stood strong and unwavering, and God honored his faith and protected him and his notion.

Needless to say, when he sized up the root of America's current spiritual crisis to be compromised pastors, he got my attention. What he meant was that too many of us American pastors have isolated ourselves from the cultural issues that surround us. We may see the destructive forces raging through our society, but we do not feel any personal compulsion to confront them. We feel content in our callings to remain somewhat aloof, preaching a gospel that separates people to a mystical world apart from sin, rather than a gospel that overcomes the sin where we live. We are no longer the salt of the earth or a light to our nation.

It is interesting that, when God chose a method of ministering to His fallen creation, he did not come as either a hovering archangel of judgment or a withdrawn guru offering the meaning of life only to those who took the initiative to seek him out. He mingled with his beloved. He became one of them. Not that he took on their sinful nature or dabbled in their weaknesses. But he got involved in their lives and communities, doing so as one filled with both compassion and mission. He certainly was not a compromised shepherd.

Have you become a compromised pastor? Have you given up your first love to the cold, hard realities and fears of ministry? Could you stand in the presence of Pastor Peter Dugulescu and hold your head up? Or do you stand by quietly as Christmas is outlawed from our schools while Halloween is advanced? As people of faith are depicted on TV as unstable or neurotic while those who live in sin are upheld as heroes? As some judges make baffling new laws through their twisted legal interpretations while others are ridiculed and sentenced for recognizing there is a greater law than that of man?

As Chuck Colson still regularly points out, the cultural leaders that led the revolutions that brought down communism all had "Rev." before their names. Come to think of it, so did many of those who fought for and shaped this country two centuries ago.

I'm glad I met this man named Peter Dugulescu. I needed to be challenged again, reminded of the unmatched power of the One I serve and the eternal significance of my own calling, and pricked to reexamine my own commitment, direction and faith.