A Perspective on Abortion
by H.B. London 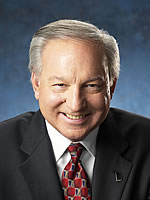 Long ago, I learned an important lesson about standing for what's right. I'll share it with you in hopes that you can avoid my mistake.

One Sunday, as parishioners exited the service, they stroked my ego with comments like, "God used you today. Thanks for your courageous stand against abortion."

I felt good about myself because I had been an enthusiastic spokesman for God on a controversial subject. The reactions were so positive that I made a mental note to preach on abortion again.

Then, as I did following every service, I went to my study to unwind. A young woman knocked on the door. I could tell she was troubled.

"Pastor, I know you're tired, and I don't want to keep you. But could you spare a few minutes?"

"Sure," I said. To be perfectly candid, I expected more affirmation, anticipating that she would also comment positively about the sermon on abortion. But she surprised me by asking, "Pastor, do you know how many women like me were sitting in the congregation today?" I thought maybe she was talking about the number of women who came to church alone.

Then like water from a broken dam, the pain from her own abortion gushed out. She graphically shared her sense of loss. She explained the agony she felt every anniversary of her unborn child's death. She described how far from God she felt. Then she shocked me even more by saying that perhaps one in 10 women in her age group had had an abortion — and some were probably sitting in church during that morning's sermon.

"You seemed so determined to communicate your pro-life message that you forgot about women like me who have lived through an abortion. You failed to realize that many men also feel guilty because they insisted or at least consented to an abortion by their girlfriends or wives."

That woman changed my life. She opened my eyes. She brought me back to the reality of what it means to be a pastor — learning to hate sin more and love sinners to Christ's forgiveness.

Don't get me wrong. I am against abortion with every fiber of my being. But I am a pastor. And being a pastor places unique demands on my attitudes.

To you pastors and church leaders who stand on the corners with pro-life signs as I have, who pray in front of abortion clinics as I have, who have pro-life organizations in your churches as I have — I commend you. I respect your bravery and your courage. I laud you for taking a strong stand against this evil.

And I plead with you to think about all the women who are spiritually traumatized when we preach about life issues because they have firsthand experience of this pain and loss. I beg you, the next time you preach and teach on the subject of abortion — or any sin, for that matter — tell your congregation that sin is wrong, but don't forget to tell them that God offers forgiveness for those who live under the dark shadow of guilt. Tell them there is hope, by adding gentleness to your preaching. Tell them that coming to God is the answer to the crushing anguish they carry. Tell them that they do not need to carry this burden any longer. View yourself not only as a stalwart against sin, but also as a physician for the soul.