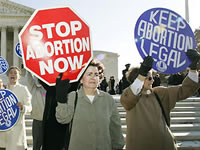 "I'll have an abortion, of course!"

Those were my words about 20 years ago when the pregnancy test came back positive, threatening to put my plans for graduate school and career development on hold. I was a woman of the 1980s — empowered and liberated by the "right" to abortion.

Abortion was legal, advertised in the telephone book by physicians with the government's implied stamp of approval. Abortion empowered me to face an unexpected pregnancy with clarity, decisiveness and self-respect.

Or so I thought.

At the time, I viewed abortion as a reasonable solution for an unmarried woman, even for me — a pastor's daughter attending a Christian university. My pregnancy and subsequent abortion were indisputable evidence that a Christian worldview was absent from my life. I was deceived by lies that appealed to my desires and seemed to alleviate my fears.

The abortion of my baby was a decision I would later deeply regret. And eventually taking responsibility for my past decision included examining the lies that had influenced me.

Lie No.1:
Abortion is the cure-all for an unwanted pregnancy.

I believed that my abortion would erase my pregnancy and make my life as it was before. That wasn't true for me or for anyone; pregnancy changes a woman. Whether it results in abortion, miscarriage or childbirth, she is forever changed.

For many women, abortion can lead to physical, psychological or emotional harm. Whether this manifests as complications with future pregnancies or struggles with substance abuse, abortion is not without consequences — a fact that women have a right to know before an abortion.

The abortion of my baby was a decision I would later deeply regret. And eventually taking responsibility for my past decision included examining the lies that had influenced me.

Ironically, the word choice is closely identified with abortion, yet many women report that a perceived absence of choice pushed them toward abortion. The most common reasons women give for abortion include a lack of resources to give birth and fear of losing their place at school or in the work force. Too often abortion is the decision a woman makes when her back is against the wall. I felt that way, too. Abortion is no choice if you think it's your only choice.

This equally powerful lie emerged during the 1960s. In the campaign to legalize abortion, radical feminists claimed that readily available abortion would enable women to control their lives. Under the banner of choice, we were assured that abortion would empower women with new opportunities in business, education and society.

Many women like me believed this would be true. Yet that's not what happened. Legalized abortion didn't promote cultural change to better serve women. Instead, abortion became society's contingency plan, creating the expectation that a woman would take advantage of legal abortion. She had fewer choices, not more.

Too often, legalized abortion reduces the urgency for employers and educators to provide many true choices for women in unexpected pregnancies. Abortion becomes the excuse not to provide campus-based family housing and child care for college students who choose life. It contributes to an environment where pregnant college athletes will regrettably abort pregnancies rather than lose scholarships. Legalized abortion lessens the incentive for employers to offer flexible working conditions like telecommuting and job sharing so women can continue their pregnancies and their jobs.

Ultimately, true empowerment comes when women know God's truth about abortion — that it pits mother against child and violates His design for human life and family relationships. Women are empowered when they can follow their God-given instincts to protect and give birth to their child even when facing uncertain circumstances.

In the shadow of regret over my abortion, I now work to increase women's access to the God-designed choice for life. Giving women the power to choose life over abortion can happen only by exposing abortion's lies and closing its traps of deceit. Each of us contributes to this change when we vote for pro-life candidates, support pro-life laws and assist pro-life ministries on the front line of this issue. Real choices for women hang in the balance.

Carrie Gordon Earll is the senior director of Issues Analysis for
Focus on the Family.